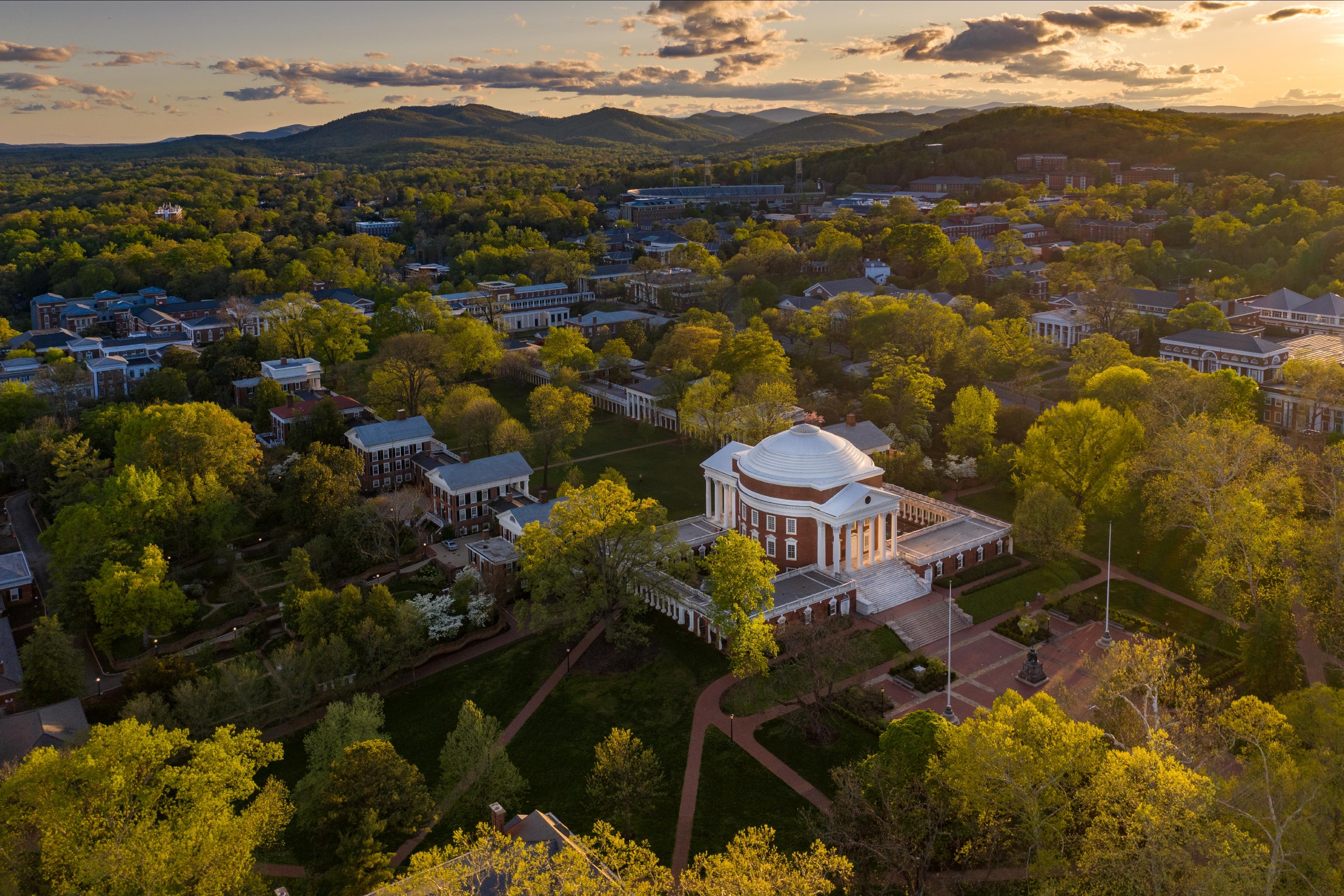 The University of Virginia’s Rotunda has seemingly been a work-in-progress from the beginning.

Designed by the University’s founder, Thomas Jefferson, the Rotunda is the centerpiece of the Academical Village. Modeled after the Pantheon in Rome, it was designed to house the library and be flanked on either side by faculty pavilions, interspersed with student rooms.

The University was established in 1819. Jefferson presented his plans for the Rotunda to the Board of Visitors in 1821, and it was still under construction, plagued by delays and problems, when Jefferson died in 1826.

Construction took several more years, and the steps leading to the south portico were not built until 1832. A leaking dome proved problematic from the start.

In Jefferson’s original design, there were two south wings of the Rotunda that contained covered exercise yards referred to as gymnasia. In 1841, in response to the increased enrollment at the University, the two south wings were enclosed to create classroom space.

The next big change occurred from 1851 to 1854, when a four-story wing with a basement that extended perpendicularly from the north side of the Rotunda was added. This annex housed classroom and laboratory space, as well as an auditorium.

In 1854, in an effort to solve the University’s need for water for firefighting and for use by residents of the Grounds, civil engineer Charles Ellet devised a scheme to put two 7,000-gallon tanks in cavities of the bricks that supported the dome. Water from nearby streams was pumped into the tanks and gravity-fed to the Academical Village. Unfortunately, the tanks leaked, damaging interior and exterior walls, loosening plaster, defacing ceilings, and damaging library books.

In 1859, the roof needed repair again, and a cupola added in 1840 was removed. The Civil War and its financial drag on the University slowed the project, and leaks in the roof and around the oculus persisted.

The roof issues continued after the war, and the annex was also in need of repair, but only minor work was performed in the postwar years. In 1886, repairs were authorized for the annex, but the leaking oculus was deemed not urgent.

Electric lights were installed in University buildings in 1888 and extensive repairs were made around the expanding Grounds in 1890 – but not to the Rotunda.

Then came the fire. Faulty wiring was blamed for a fire on October 27, 1895 that destroyed the annex and the Rotunda.  The blaze apparently started in the annex’s upper northwest corner. Despite efforts to halt the flames’ advance by dynamiting the portico connecting the annex to the Rotunda, the fire spread and students and faculty rushed to salvage books and artworks.

Following the fire, a succession of architects were brought in, the first being McDonald Brothers architects of Louisville, Kentucky. The McDonalds’ initial designs of a restored Rotunda eliminated the upper floor, extending the Dome Room up from the main floor and eliminating the oval rooms on the main floor. Their designs also created a north portico.

The Board of Visitors decided it wanted a firm “not of local repute only but of broad and national consideration.” The prominent New York firm of McKim, Mead and White was retained in 1896. The board charged the firm with redesigning the Rotunda and enclosing the south end of the Lawn with three new buildings, which came to be Rouss, Cocke, and Cabell halls.

The task of re-envisioning Jefferson’s intent fell to Stanford White.

Jefferson had designed the Rotunda with three floors, and Stanford White changed it to two floors, making the Dome Room much bigger. White sought to merge Jefferson’s design with the University’s needs, which still included using the Rotunda largely as a library. He also designed east and west wings on the north side of the building, to match the south wings, and he connected the wings with colonnades. He designed the Rotunda with central heating and a mechanized ventilation system.  While the central heat was retained, the ventilation system was scrapped because of cost.

White retained some of the McDonalds’ interior designs and convinced the Board of Visitors that Jefferson had included a third story out of necessity, but that his desire would have been for a large open space had it been possible at the time. The oval rooms in the basement level would serve as reading and reference rooms for the two-story library with galleries ringing the central atrium. White’s plans also restored Jefferson’s semi-circular staircases on the east and west sides of the southern portion of the Rotunda’s barrel.

The Board of Visitors insisted that the Rotunda be constructed of fireproof materials. White commissioned Rasfael Guastavino to create a vault of clay tiles for the interior structure of the dome. More fire-resistant than concrete or steel, the vault was also impervious to rot, insects, and the elements.

The building was dedicated in 1898, though some details were not yet completed. The previously rough-cut capitals were finished in 1904, carved in place after the University received a donation to complete the work.

Over time, the library expanded, spilling into former classroom space in the Rotunda’s wings. In 1938, Alderman Library opened, assuming the role of the primary library on the Grounds. In June, the University applied for a federal Public Works Administration grant for improvements to the Rotunda. Charlottesville architect Stanislaw Makielski, an associate professor of architecture in the University’s McIntire School of Fine Arts, was contracted for the “restoration of the Rotunda,” and Fiske Kimball, an authority on Jefferson’s architectural work and the neo-classical revival in America, served as a consultant. Kimball had been a professor of art and architecture from 1919 to 1923.

The $136,373 project included converting the space in the wings into offices. The cryptoporticus – the ground-level covered passage in the south wing – was created and cast-stone balustrades on the terrace were replaced with marble, as were the hard sandstone steps on the south side of the Rotunda.

By the mid-1950s, momentum grew to restore the Rotunda to Jefferson’s original design, with the idea of moving the president’s office and bringing Board of Visitors meetings back to the Rotunda. Professor Frederick D. Nichols of the School of Architecture met with the Buildings and Grounds Committee on how to “correct the alterations” made by White. In 1957, the board approved a plan to do so, but also specified that it be paid for with private funds – which took another 15 years to raise.

In 1965, University President Edgar Shannon Jr., appointed a committee to guide the planning; the same year, the federal government designated the Rotunda as one of four National Historic Landmarks in Virginia. In 1966, the Board of Visitors selected architects Ballou and Justice of Richmond to prepare restoration plans. The architect recommended retaining the fire-proof aspects of the White structure, such as the Guastavino vault, but clearing out the entire interior.

In 1972, the University received a Department of Housing and Urban Development grant to supplement the privately raised money. The U.S. Bicentennial Committee recommended that the Rotunda restoration be the nation’s top priority, in terms of preservation projects, for the 1976 Bicentennial celebration. Finally, work got under way.

The McKim, Mead and White interior was completely removed. The Rotunda was returned to three stories, with the rooms placed as Jefferson had planned. The building was closed for about two years.

The roof was also replaced. White planned for the copper dome to be painted white, but that never happened and it developed a whitish-green patina. The copper plates gave way to galvanized steel panels, which were painted white.

The workers also replaced the oculus in the center of the dome roof. White, in his design, had created a more elaborate skylight than Jefferson, and this was replaced with a simpler one made of bronze and Lexan.

The project was completed in time for the bicentennial celebration, and on July 10, 1976, the Dome Room was the site of a luncheon for Queen Elizabeth II, hosted by Virginia Governor Mills E. Godwin.

By the spring of 1998, the marble bases of the columns on the south side of the Rotunda required repair. Workers also replaced the stone paving on top of the southwest terrace offices, and installed handrails at each side of the main stair leading from the Rotunda deck to the Lawn.

The most recent restoration work on the Rotunda started in 2012 and was completed in 2016. Today, the newly renovated Rotunda, guided by Jefferson’s original designs, is equipped with modern enhancements that will sustain UVA’s crown jewel in its third century.